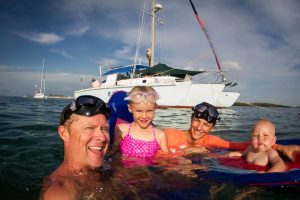 Once upon a time circa 2005 Ashley was on her way to the Peace Corps.  She had fulfilled all of the medical clearance requirements and was waiting patiently for her assignment.  During this waiting period she continued to play Ultimate Frisbee with some of her old college buddies in the local co-ed league.  This is where life threw her a scoober, which it is known to do, and she met Ren.  It didn’t take long for the two to fall in love.  Ashley’s dreams of adventure through the Peace Corps were thwarted, dashed against the rocks with Ren’s plea for her to stay. 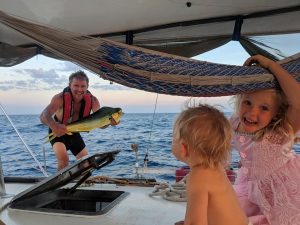 Although staying behind was a terribly difficult decision for Ashley at the time her disappointment was tempered by the excitement of new love and a new game plan.  The Chapmans-although not “the Chapmans” yet-wasted no time formulating a five year plan.  They should have known then that things were going to work out.  At the end of the five year plan was #6, “Find and Procure a 32’ (or larger) Sailboat” and start the adventure.

I should disclose to you that Ashley and Ren were not avid sailors.  Ren learned to sail on a Sunfish as a kid, which is where his experience ended.  Ashley didn’t know the first thing about sailing.  The two were attracted to sailing for the adventure.  As a means of traveling nice and slow to a new port whenever and wherever the wind blew.

In the meantime, five years of meantime, the Chapmans worked.  Ren owned and operated a successful playground business called, Complete Playgrounds, where he sold, designed, built and maintained “learning environments” largely for childcare centers.  Ashley found gainful employment utilizing her college degree as an environmental consultant.  #6 on the five year plan went on the back burner as they enjoyed making money and spending it as fast as they could.  When the financial crisis of 2008 hit both were affected by the economic downturn.  It was just then that they were introduced to freediving.

Ani (aka Elsa) Having a snack on deck aboard Jade in Roatan, Honduras

They began freediving every chance they got and eventually, in 2009, they started teaching.  The workload shifted from their suffering day jobs to the Life Aquatic.  Ashley slowly started spending less time at work and more time teaching freediving while Ren immersed himself in underwater videography.  Their plan started to come back into focus and Ren began searching the internet for possibilities.  Six months into his search, Nila Girl, the couple’s first vessel appeared on Ren’s screen.  The two looked at several boats closer to home but planned a trip to Merritt Island, Florida to check out the 35’ Pearson.  After two visits to the boat, two visits to the owner’s house and some money shuffling, Ren and Ashley became the happy new crew of Nila Girl.  In November of 2010 they motored their new boat back up to North Carolina. 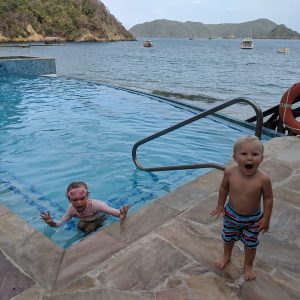 The commandorables hamming it up in Tobago.

2011 was a year of change.  In April the couple officially became the Chapmans, sold everything and moved onto Nila Girl by July and headed south in November.  They sailed around the Caribbean on Nila Girl from 2011-2014 logging over 16,000 miles on the Pearson.  2014 was the last cruising season aboard Nila Girl.  By then the family consisted not only of two adults but their new infant daughter, Ani.  The boat quickly felt cramped and after a six day downwind passage, holding Ani nearly the entire time, Ashley threatened mutiny unless they sold the boat and tried something new.  Ren and Ashley had been talking about trimarans for a while after making fast friends with Lance Leonard, trimaran aficionado and lifetime pirate.  Just like in the early stages of their relationship the two relied on a solid plan to make the new boat happen.  This time around, they also had the advantage of their new faith to help things along. 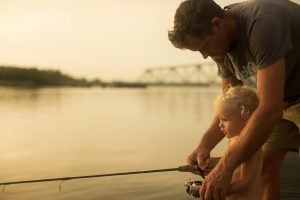 Ani and daddy fishing in the Cape Fear river 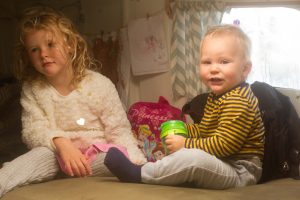 The crew is pooped from passage making in cold weather.

Once they stopped in Key West on their way back home to North Carolina after the 2014 cruising season, Ren listed Nila Girl.  In the short time that Nila Girl was listed, he also found Jade right in Key West!  They had noticed Jade two years prior sitting at a marina, took notes and didn’t think about it again until 2014.  They began negotiating the purchase of the “not for sale” Jade (Holokai at the time) and simultaneously negotiating the sell of “very available” Nila Girl.  Ren and Ashley bought Jade and sold Nila Girl in a three day turn around!  There are a lot of boats on the market for years but the Chapmans prayed on this.  The sell and purchase happened so fast they were less than ready when moving day came.

After nine months of repairs and overhaul to Jade back in North Carolina the good ship was launched and the family of-now four with the birth of their son, Cape- are currently enjoying the non-heeling, platform from which they live and dive!

You can do so by becoming a Patron. We offer a variety of rewards for becoming a patron and you will be supporting the education and growth of a family dedicated to needing less and doing more.