While in Green Turtle Cay (GTC) we managed to pickup our first crew aboard Nila Girl.  Ren was hankering for a cold drink and some socialization (apparently only having me to talk to 24-7 isn’t enough.  I don’t get it).  We walked down the half-paved, half-dirt road from the house we stayed in to the Green Turtle Club,

Digression:  Yes, we are lucky!  The night we pulled in to White Harbour Ren announced our arrival on Facebook where he was assaulted by a barrage of instant messages from our very generous friend, John Shedd, or Doc as the locals more affectionately know him.  Not only does Doc own a house on GTC but he insisted that we stay there.  Although I was already naked in bed, and almost asleep, I was prodded to rise with the hopes of a full on shower (you know, hot water turned up, letting the water run over your head like you’re not going to run out of it anytime soon…or maybe you don’t know because all of your showers are this leisurely!), a bed that doesn’t move, and a little piece of yard for Oreo to pee all over. 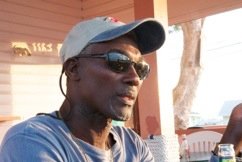 Back to end of first paragraph: your average overpriced tourist hot-spot.  There were already two people at the club’s bar when we arrived; Brendal, the local (and not so local) dive legend who runs Brendal’s Dive Shop.  An example of the not so local legendary, earlier that day we hung out with Brendal for a moment, stopping by to say, “Hey” from a mutual friend.  While we were hanging out we learned that Brendal was waiting for the Today Show to come interview him.  A huge plaque on his dive shop wall boasts a whole list of similar accolades.  Not to mention, he’s a 50 something, completely buff, dark black man (think, Seal dark) with high cheek bones who wears a red speedo.  He is a specimen deserving of a second look, man or woman, you look no less than two times!  Brendal was drinking something orange colored and was sitting next to a woman who I took to be part of the Today Show entourage.  She was alone except the company of Brendal and a salad, which had too much Italian dressing on it (I cannot vouch for supper at the GTC but breakfast was amazing!) and wasn’t dressed like a cruiser, meaning, she looked clean and put together with big wild hair that had been slightly tamed and reigned in to the top of her head.  My cutoff shorts were no match for her colorful, layered style. 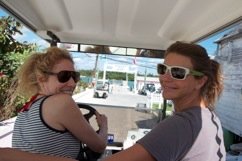 Nina and Ashley tearing it up on a golf cart.

As we started chatting, and she told us she was a writer from NYC, my interest was peaked.  We learned, over $8.00 cocktails that we later felt guilty for indulging in, although she drank cranberry juice which I’m sure absolved her guilt, that Nina was not, in fact, part of Brendal’s production.  She was a lone traveler who had ventured over to GTC from Treasure Cay for a look at the “real Bahamas”.  I was immediately fascinated, a writer (who cares what she has written and what she hasn’t, I was definitely curious, however, about what she was working on at the moment, being alone on vacation meant that she had a lot of down time for thinking) and a lone traveler.  I have always wondered about the merits of traveling alone.  I have also assumed that they are many as you have all the time you would ever need, without the structure of considering someone else’s schedule to really get a place figured out.  Ren and I met early, meaning soon after I graduated from college, which has limited my opportunities for alone travel, but he has an adventuresome spirit.  I don’t think I’m missing out by having a permanent traveling companion, because he is so intrepid, however, to think is one thing and to know is another.  It may be nice to try it sometime (Nina, I think ennui would be an improper term, if not a downright impudent term to use when describing your traveling audacity!  Screw whoever said that).

The four of us, Nina, Brendal, Ren and myself chatted over drinks with the occasional input from the bartender, Julie, who poured us drinks, listened and spent the rest of her time holding the top of the bar down with her elbows, just in case it decided to run off I guess.  With nothing else on the agenda that night (or really any other night for that matter, we are on sabbatical) we agreed to follow Brendal and his wife Mary over to a local party at Don’s house.  When Mary walked into the GTC bar in a white miniskirt and scarf, I felt like I was sitting on the barstool in my pajamas.  My mother would not have been proud of me next to Mary or Nina.  I would have definitely gotten a, “Aaaaash!  At least brush your hair!  Damn girl!”  I’m still not sure who the hell Don is but I do know one thing, the people of Don’s party were gracious, offered an open bar, shook hands firmly and had the music turned up WAY too loud.  So loud that Ren, Nina and I decided the party wasn’t conducive to conversation so we spent the rest of the night touring GTC, drinks in hand (sans Nina) on the golf cart she had rented.  We enjoyed winding around the dirt roads, a new beach at every bend with the gasoline golf cart engine humming.  The wind was up a bit and felt good on our skin, cooling but not cold.  There was no “city smell” on GTC.  You could really open up your lungs and let the fresh air in.  Ren and I would pay $8.00 per drink but drew the line at renting a golf cart, which proved to be a huge asset for our explorations.  In time, Nina’s golf cart became as good as our own anyway, so it was a win, win (or win, win, win as Michael Scott would call it). 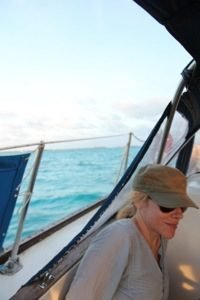 As we parted ways that night, we made firm plans to dive the next day and firm-ish plans about a meeting time.  Nina was interested in breakfast at the GTC.  She was craving french toast, which I agreed to make on Nila Girl the next morning.  I only agreed to make the french toast because the thought of paying too much for french toast where the bread may be cut too thick and soaked in too little egg wash makes me sick.  It makes nina sick too!  We both hate dry french toast!   Now, I already told you that the breakfast at GTC was delicious and worth the money they charge for it, however, you cannot gamble with french toast.  Armed with a new personal breakfast connection we departed until the following morning.  On the way home Ren and I decided that Nina was looking for adventure, and being that she has been living in NYC, she may benefit from our slow, southern style (cue Alana Miles’ “Black Velvet”).  We would invite her to save some money and come stay at the house with us for a night or two.  There was plenty of room at Doc’s.

Not to get into too much detail about the morning dive trip since I have already described it in detail (please see previous post titled, “The Blues”),  you must know two things that I did not mention before.

1.Nina agreed to stay at the house.  She was stoked about the opportunity.  As one who has been traveling for years she has a healthy sense of adventure even if she doesn’t know it.  Without the NYC neuroticism, she would be a regular Lewis and Clark (or one of them anyway), paving the way for the rest of us.

2.Before the dive, but after and ONLY after breakfast,  we suited up for our dive on Nila Girl.  Nina, not being self-conscious about her body, even with a full breakfast belly, stripped down to her nudey suit and started to don my 5mm Dessault wetsuit.  She did not have her bathing suit and I didn’t want her to get her undergarments all wet while diving.  She needed to wear them later, so yes, I encouraged the situation.  As happens, especially with a 5mm open celled neoprene wetsuit and extra-especially for her first time attempting to put on the suit, she got completely stuck at the head.  She could not pull her head through the neck and hood of the suit.  This means that her arms were through the arm holes but suspended out and stuck like the little brother from “ A Christmas Story”.  You  know the scene where he cannot put his arms down because his snow suit was too thick?  That was Nina but with her head still stuck inside, arms rendered useless, and the front of the suit conveniently jacked up, and also stuck, above her breasts!  Her girls were really catching some fresh air.  Our dive companions, Ren and local guru, David were trying their best to be gentlemen but come on, if there is a train wreck ahead, you have to slow down and look (or so they say, although I’ve never witnessed a train  wreck).  Now imagine the train wreck were breasts and the girl the breasts belong too is stuck so that the breasts are flapping in the wind and she can’t tell what is going on outside because her head is still inside.  To make the storm a little more perfect, a huge catamaran with six retirees rolled by about ten feet from Nila Girl’s bow.  The cat’s crew were on the geriatric side of retired and were moving slowly, really slowly, since we were anchored in a sound with a ton of other boats.  I rushed over to pull the  wetsuit over Nina’s head but was rendered helpless by the moment.  I looked at the boys who were sharing ear to ear grins as they watched the faces of the elderly on the cat.  I looked at the cat and cringed as all twelve eyes were staring at Nina’s helpless situation and her breasts of course.  Ren yelled out, “Welcome to GTC!”  The cat’s crew waved and smiled.  We broke down in tears, except Nina who had no clue what was going on.  I ripped Nina’s wetsuit over her head, along with clumps of her hair, and started in on a play by play of what she just subjected everyone to.  With her head stuck inside the suit, she had no clue she should have been charging for the show.  That was the fortunate beginning of an even more fortunate day of diving.