The Chapmans: A Sailing Family with a Freediving Problem 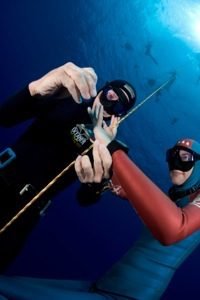 It was the spring of 2007 when a friend of Ashley and Ren’s, Joe Sheridan, approached Ren with the opportunity to do some SCUBA diving off the North Carolina coast. Joe was just finishing his Dive Master curriculum and wanted to log some hours with Ren who had been SCUBA diving since the age of six with his father who is still teaching SCUBA at the University of North Carolina at Wilmington. What Ren and Joe did not realize was that an addiction was about to hit them and change their lives forever.

What began as a means of collecting fish- freedive spearfishing -turned into a lifestyle much like sailing did for the Chapmans. Ren and Joe introduced Ashley to freediving and by 2009 Ren and Ashley had begun teaching! Ashley soon learned that she loved the competitive aspect of the sport, challenging herself to deeper and deeper depths whenever she had the chance. By 2011 Ashley had broken her first national record only to go on to break 3 world records by 2012. Since that time, Ashley has maintained the position of top U.S. female freediver and has a total of 12 national records to add to her 3 world records.

The Chapmans continue to teach while traveling the Caribbean aboard Jade. Please check out the Course Schedule at the Evolve Freediving website. Courses run in their home port of North Carolina and throughout the Caribbean. You can keep tabs on their current location via the Gift Of Going Without Facebook page or Jade’s Spot tracker.