I woke up to the gentle rub of a familiar and rough hand on my back.

“Come on Ash, time to get out of here,” as Ren tried to coax me out of bed.  I whined, and whined and whined, until he had to ask me again.  Not so gently the second time around.  We stayed up too late last night saying goodbye to Jeanette and Brian from Puff.  It’s likely the last time we’ll see them for a few years, unless I get sponsorship to go to the Vertical Blue competition in Long Island this coming November.  Hint, hint.  5:30am was not in my useable vocabulary this morning.  The only thing that was may have been, “this sucks.”  However, when it’s time to go, it’s time to go.  No amount of bitching on my end was going to change the fact that we have ten days to get from Long Island to Jamaica in the forecasted light winds.  Ren thinks it will take at least six days to cover the four hundred mile distance, again, the winds are forecasted as light.

I ripped the covers off of myself and stomped around with a sour frown on my face.  It was dramatic, especially considering I had to make my point in the confined space of our cabin.  All the while Ren is humming and dancing about.  He is more of a morning person than I am.  It’s a quality I love about him.  He bounces out of bed and spreads his contagious good cheer song and dance by little song and dance.  I immediately felt bad for making a tough situation worse with my crappy attitude.  We worked together to haul the dinghy onto the bow of Nila Girl.  By carrying the dinghy on Nila Girl instead of towing her behind us we will gain up to one knot of speed.  We only tow her on shorter, one-day excursions.  Ren, engine already warmed, pulled Nila Girl up to the government dock in Salt Pond where we have been beating around for the last month.  Oreo was awarded one last land pee and I threw away one last bag of trash.  Reluctantly, Oreo and I, answering Ren’s whistle, walked back over to Nila Girl after out ten minute land break.  Ten lousy minutes to last us six days on the boat.  I was looking on the voyage with trepidation.  We neglected to say our goodbyes to Mike and Jackie at Long Island Breeze.  We did not say goodbye to the donkey, Grey Boy, who we made friends with, visiting him nearly every day.  We taught him how to play tug of war with a piece of rope in lieu of nipping at people for affection.  I suppose that’s the nature of the sailing life.  Unparalleled experiences, new friends, landscapes but leaving a wake of farewells behind you.  You are always saying goodbye.  As the captain pulled us away from the dock I said my silent goodbye, shed a tear, straightened the cockpit for travel and went back to bed.

We ate leftover lobster and garlicky rice from the previous night’s “goodbye supper” for breakfast.  On the side, some of the homemade blueberry jelly my Grandma canned.  The rice was made garlicky by adding a pickled mixture of whole garlic cloves and gardenier mix Ren’s Mom helped us can.  The mix is perfect to add a punch of flavor to anything or to eat straight, as an appetizer.  The day is hot, sunny and the water a deep purple.  I cried once at the thought of leaving a month’s worth of routine and new friends behind.  Not to mention, the most perfect freedive training alongside world record holder, William Trubridge.  We dove every single day almost, great preparation for the feat ahead.  I always cry when it’s time to move on but the tears dried as Ren reminded me that we are on our way to Jamaica.  The anticipation of the new adventure creeps into all the empty spaces in my heart leaving Long Island has left.  I am ok again.  Oreo is hot this afternoon and may get a haircut tomorrow.  It is particularly hard to keep him comfortable during a passage but it is hard on all of us.  Now back to “The Autobiography of Mark Twain.”  Thanks Mom and Dad…and Corey for bringing it over for me! 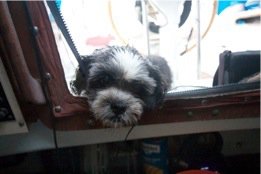 Oreo waiting patiently for his supper, which was rarely just dog food.

We caught a skipjack tuna about midday.  Oreo had a supper of tuna, including the roe while we had lightly seared, but slightly overcooked tuna steaks on a bed of pasta.  We also caught a dolphin but readily released her since we had meat already.  The tuna is going fast so we will keep the next mahi we catch.  The sunset was brilliant but foreboding.  Anxiety was starting to creep in as the sun hung lower and lower in the sky.  I always dread the first couple of nights watch.  Everything is intensified at night when veiled in a cloak of darkness.  The wind blows  harder, every bump against the hull is deafening as I imagine the boat twisting in half and breaking apart between waves.  All of this teamed with a little sleep deprivation should be a torture technique.  Tonight could be a long night punctuated with tears as I tend to get homesick while at sea.  No distractions, just your thoughts and a lot of time.