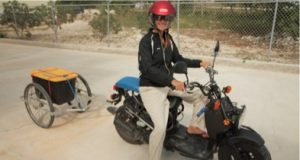 Ashley on their new ride, the ruckus! Check out the retrofitted blue seat in the back welded by Ren. And don’t forget the trailer in the back.

In a previous blog post I made it clear that hitchhiking was the preferred method of travel here in the Bahamas.  Well, that was before we got the Ruckus.  Before the scooter came along I looked forward to who I was going to meet along the road and the slow journey from Salt Pond to the Blue Hole.  Now, I can’t wait to crawl onto the little blue retro-fitted seat Ren welded to the back of our 2009 Honda Ruckus.  Not only is the Ruckus a blast to ride on but it’s cool too.  Google it!  There’s a whole sub-culture of people out there dedicated to pimping their modest Ruckus rides.

Because maintaining a schedule is more important this season due to having people come onto the island and meet up with us for training and such, Ren traded his Miller Syncrowave 250 TIG welder for the little Ruckus.  This way we could rest assured knowing that we could take the reigns on our schedule destiny.  Of course, traveling on a moped that tops out at 40 mph (and trust me, that’s screaming) with two grown people and pulling a trailer, you are not going anywhere fast.  In fact, it takes us just about as long now to get down to the Blue Hole as it did when we were hitching.  But now we do not have to carry loads of stuff back and forth.  If Ren has to get some of his power tools “up” South (yes, that’s the Long Island way to indicate that you are traveling South.  They also go “down” North.) to help our friends Atil and April out with some home improvement projects he has only to load the tools onto the trailer we pull behind the Ruckus, strap them down with some bungee cords and kick it, hoping he does not spew tools over the side of the trailer as we bump down the Queens Hwy.

The trailer we use is worth mentioning.  As a last rendezvous with the Syncrowave, Ren spent a few days riffling through his pile of scrap aluminum and designing and welding the cutest… ahem… I mean sturdiest little pull behind trailer you have ever seen.   The trailer attaches to a black metal plate that hangs down from the rear of the Ruckus.  the plate’s purpose is to suspend a red reflector down low by the rear tire and fender.  Now it’s job description has been expanded to include being an attachment point for the trailer tongue.  We all keep double duty around here.

The trailer flys along the rough road making contact with the Queens Hwy through two old bicycle tires salvaged off a couple of different bikes around Ren’s grandfather, Gaga’s, shed.  We strap a black Rubbermaid box to the trailer with bungee cords and fill it with food, clothes, water, whatever we will need that day.  Since we spend our days so far from Nila Girl we pack heavy, ready for internet access if we can find it, last minute supper plans, or the emergency grease job Ren tends to find himself caught up in.

The real magic of the Ruckus does not lie in it’s convenience.  This factor is only a bonus.  We are used to an inconvenient life on the boat where a trip to land includes a tippy dingy ride to shore, sometimes through winds and sea spray.  Where your meals are dictated by what’s available locally, not by what you want for supper.  Where calling a business for service includes no less than five disconnected numbers, two hang ups and one answer that leaves you more confused than before you asked.  So convenience is secondary.  The real magic is the freedom we have to explore land.  Exploration by sea, check!  We have Nila Girl for that.  Exploration by land has always been limited by lack of transportation.  Not anymore.  Two days ago we drove to the end of a long dirt road just because we could.  At the end of the road was a beach,  not just a spit of sand with some salt water lapping against it.  I mean a beautiful cove with rocky cliffs and pink sand.  The kind of place that invites you to take your clothes off and hop in.  No one’s looking.  They weren’t either.  There was not a sign of anyone anywhere.

We rode past the brach up a hill made of red dirt and gravel.  Flanked on both sides by dense vegetation, including the scarring poisonwood.  I have three scar streaks on my left thigh from the stuff.  On the Ruckus we are fearless.  We bob down the road hopping from side to side to avoid big holes in the ground.  The Ruckus crashes through vegetation on both sides of the road when Ren pushes the handlebars a bit too far in one direction, unaware of the poisonwood.

Ren’s circular saw clanks around on the trailer behind us, along for the ride just like the rest of us.  We push just a bit further to the top of the hill, stopping just before the path narrows a bit too much and starts it’s decent.  On our left is miles of stinky mud covered with sporadic green plants and egrets.  Although the mud smells, the place seems healthy.  An inland estuary and probably a relic salt pond where historically salt was harvested after sea water evaporated.  To our right, miles upon miles of ocean.  Three sets of waves, almost organized enough to ride, crash against the reef leaving only foam to continue on the journey to the pink sand.  A huge rocky cliff is just to the left of the wave set.  The cliff protrudes from the ocean abruptly, reminding us that we are standing on ground just like it.  We are standing on an ancient coral reef, abandoned by the ocean as sea levels fell.  Here it is hard to decide wether or not to stay and enjoy the privacy or leave.   Somehow, slightly feeling that we shouldn’t be there.  That we had stumbled upon an untouched, unmarked place.  A place that our human hands could only destroy with a little time.