Mom’s Fear of the Ocean 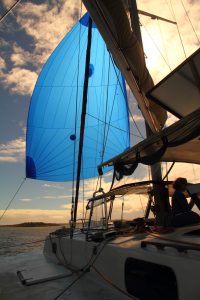 Flying the kite, headed towards the unknown.

I’ve come to realize that the fear of the unknown is better than what you already know can kill you.

Sometimes my Mom finds it necessary to remind me that we’re in the middle of nowhere.  This sentiment is usually expressed after our decision to leave the safe confines of the Intercoastal Waterway (ICWW) for the dangers of the ocean.  She tells us this in response to her fear for us on the big blue.  The thought of her little family sailing on the ocean conjures images of a plywood heap, barely floating with her half starved crew dodging pirates, sex trade minions and the temper of King Neptune himself.  It’s a miracle we survive! 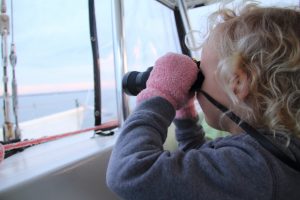 Ani’s job as the Comandorable is to be on constant lookout for pirates. So far, so good.

What she doesn’t understand or get to see is that the Waterway is exhausting.  Sure a few hours or even days on an especially beautiful stretch of the waterway such as the Low Country of South Carolina or even northern Florida can leave you rejuvenated, grateful for the chance to observe creation.  But we all know intrinsically what lies just south of rejuvenation…exhaustion.  Like the first piece of pie, the proverbial icing on the cake, those first few days on the ICWW leave you feeling satisfied without being too full.  However, splurge on a second or third piece and you’ll never be as satisfied as if you would have stopped at one.  You’re now left feeling heavy, unmotivated and in a sugar coma.  Ah, the Waterway after day four.  The monotonous hum of the engine (like nails on a chalkboard to a sailor), the physical demands on the captain to stay on the stick hours upon hours and days upon days without the  option to “set it and forget” in the vastness of the ocean, and of course trying to occupy a tenacious three year old with extremely limited physical outlets stretching your imagination to the brink of it’s shelf life.  It’s enough to suck the life out of anyone.  Especially me. 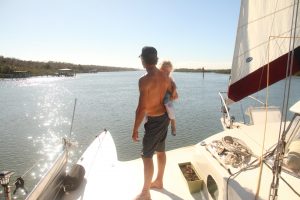 Fatigue can set in when you’re constantly on watch in the ICWW. The Captain and the Comandorable take turns keeping watch for dolphin.

Despite the hardships associated with the ICWW (first world problems, I know) another much more critical reason to reach for the high seas comes to mind.  Just turn on the news….get it?  King Neptune’s wrath does not hold a candle to to psychosis we get to dodge at sea.  The motion of the ocean can illicit fear at our most basic level, survival.  The discomfort and fear felt at sea is the kind that heightens the senses and makes one feel more alive and connected to both the natural world and God at the same time.  I welcome this emotion.  The fear and discomfort illicited by Dylan Roof, John Wayne Gacy or Charles Carl Roberts IV is unnatural, terrifying and unconscionable.  Sea monsters are no match for the real monsters that prowl the Ft. Lauderdale airport or even sleep next door.  The abuse and disregard for human life is enough to keep me at sea forever.  I understand that this is a selfish state of mind at best.  Why do I reserve the right to run and hide, sheltering my family from the inhumanity?  The short answer is that I don’t.  Life is best lived in the trenches.  But sometimes we’re offered an opportunity for a break.  A chance to refuel before jumping back in the mud with everyone else, with the unthinkable.  I’ve come to realize that the fear of the unknown is better than what you already know can kill you.