In the early 70’s a young American by the name of Jeff Coxwell was exploring central America and the West coast of Costa Rica when a couple of long distance sailors arrived in the harbor aboard a particularly interesting sailing vessel they called a “trimaran”. 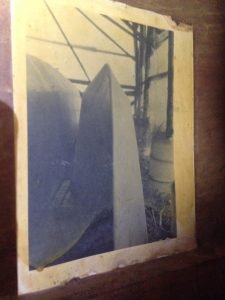 Jade’s ama lying beside the main hull. Circa 1980. This photograph is epoxied inside Jade’s port ama.

From there Coxwell began searching for a plan to construct such a vessel when he came across the Jim Brown designed Searunner.  Brown offered five sizes from a folding, trailerable 25 footer to the 40 foot model. Coxwell chose the 40 for her large living quarters and comfortable sailing characteristics. In 1979 he began construction in a small community in Oregon on the Pistol River and she was completed in 1982. 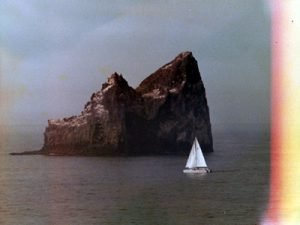 Named after Coxwell’s still born daughter, Jade, left Oregon and spent the majority of her years along the gulf coast of Texas where she was traded several times only to end up in the hands of Fred Sherman- a playboy captain with a love for adventure and women. Sherman changed Jade’s name to Holokai and at the age of 69 made his last voyage from Texas to Key West, Florida where the trimaran then sat stagnant for six years until Ashley and I happened to stumble upon her. She was in the water in a marina called Safe Harbor where Sherman was well known by the locals as a “dirty old sailor”. Stories of him shaving in the community pool and walking around in his birthday suit passed our ears in the two week period during the purchase of Jade. He was beginning to let the boat go down hill. There was rot around a few of the windows forward and she smelled, ahem, strongly in her stern castle. Fred had created a mote of urine filled coffee cans in the cockpit since Holokai was absent a proper marine head. Ashley recalls sticking her hand in one during one of our inspections and still grimaces about the experience. I was seeing past the stench. I had a vision and coming off a 35 foot Pearson, this boat was a dream come true and would be perfect for our new family. At the time Ani was nine months old and already the good ship, Nila Girl, was feeling cramped. We made the deal with Sherman and on August 4th, 2014, we became the proud new owners of a 40 foot Searunner trimaran! On August 5th we sold Nila Girl for a record turn around time.

Ashley looks up from the forecastle bilge.

Ashley flew home with Ani and a week later our friend Kolt Johnson helped me deliver Jade (the name was changed back to the original after hearing the story about how she was originally named) to her new home port of Wilmington, North Carolina. We took her directly to the boatyard, hauled her out and right away I began breaking into the areas of concern. After being back for just a week I had already cut the forward window out and replaced the water damaged plywood with foam.  I had also cut an additional hole from the port side front window down to the bottom of the boat which is when…dun, dun, dun…we found termites! Dry wood termites. The kind that don’t need earth to nest in. They fly in and enter through rot. I found them around the two front forecastle windows, the forecabin hatch, the forecastle house top and the worst place of all, in the centerboard trunk. 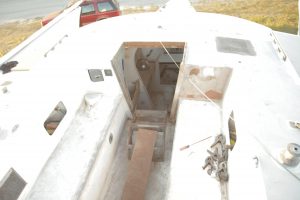 The trunk is comprised of  two 3/4 inch x 8 feet long x 6 feet tall sheets of plywood that extends from the cockpit floor straight through to the bottom of the boat dead in the center-the heart of the boat. At that point Ashley kept asking if we made a bad decision. I kept assuring her that the boat would be fine.

After nine months of slaving away, Jade was relaunched in April 2015.

The good ship Jade was back! Since her splash,  we have logged over 4,000 miles from North Carolina down through the Bahamas, through the Windward passage to Jamaica, up to the Cayman Islands, down to the Bay Islands of Honduras and back up to Key West, Florida with a continued schedule of sailing back to NC in July. 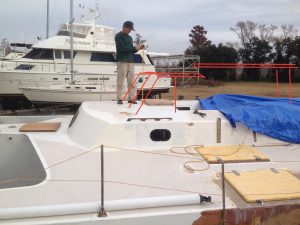 Jade is a true sailing vessel with only a 15 hp outboard for maneuvering purposes. She carries a roller furling yankee jib, stay sail and main with three reef points. We average 7.5 knots and have seen 16 knots surfing down the face of a wave. It’s a truly amazing feeling- the acceleration of Jade. I now understand how a trimaran set the world speed record. 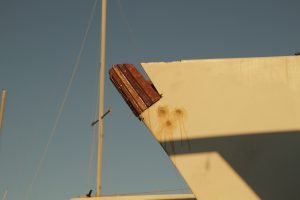 The stainless chainplate was built into the nose of the boat and was rusted through.  In order to replace it the nose had to be rebuilt. 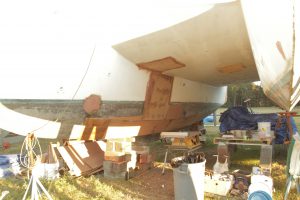 Termite damage down to bottom of boat. 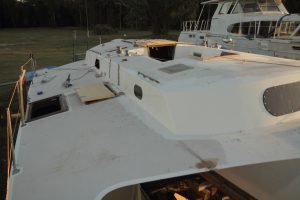 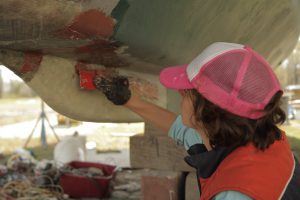 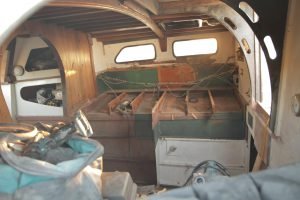 Galley prior to renovation. 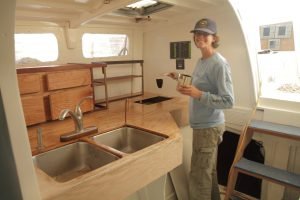 Ashley putting on the final coat or epoxy. Jade’s galley after renovation. 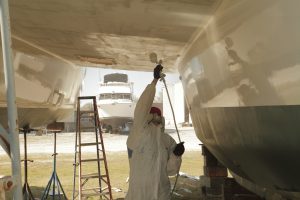 Topcoat going on. Dupot’s Imron two-part urethane paint was used for Jade’s topcoat. Imron is durable and easy to apply via spray or roll and tip.

The following is the reprinted introduction from the Searunner Catalog, written and printed by Jim Brown in 1975.

Multihulls are developmental boats. For many of us, this development is very attractive because it allows us to really make a difference in our boats, and in our lives as sailors. I believe that Searunner trimarans exemplify this difference. Their development has stabilized, and their accomplishments suggest that they are worthy of your consideration for serious ocean cruising—especially if you intend to build your own boat.

Selecting a design is no simple process because much of the analysis is obscure. You must try to weigh such factors as: the skills required of the builder compared to the end resultant quality and appearance; and the designer’s choice of materials and construction method as relates to known performance and longevity of his boats. You must appraise the cost of the finished boat as it relates to value received and value resold; and examine the sea-keeping qualities and forgiveness aspects of the real boat in the real ocean. Think of the safety and performance of your vehicle, and the on-the-go comfort of your home, all at once.

This is a complex analysis, I admit, and weighing-out quantities against qualities tends to blind us from the basic quest … which is to find a boat we like! A serious sailor must appreciate his boat on an aesthetic, emotional level or else the two of them will never be safe and happy together. This is a very personal choice you are making.

Let me tell you of my own appraisal of Searunners. First of all, these boats satisfy me personally. Of course my opinion is biased because I designed the Searunners. But second, it appears that they also satisfy the diverse requirements mentioned above, and for lots of other people besides myself. There are more than a thousand of us who have chosen to build our own boats from among the five Searunner sizes, and there are probably two-to-three hundred of us who have completed our project and moved into the realm of ocean cruising. It is widely agreed among us that our boats meet the real cruising needs.

>Three main factors explain Searunner acceptance: design, safety, and service. The first one—design—I was involved in myself, but safety and service were largely brought about by other people. All of yacht design is said to be a compromise, and yet the current trend is toward great divergence between racing and cruising; between super speed and super comfort.

I am against the divergence. Experience has taught me that a cruising boat must be good for something besides just going fast, and besides just living aboard. If it is really used for ocean travel, it needs to have performance and accommodations in about equal measure. The real virtue of the multihull is that, if it is well designed, it can provide more of both in the same boat.

Relative to other multihulls, or to any other sailing boats of comparable size, I believe that Searunners combine more of these two prime features—very good performance for an easily-handled cruising multihull, and very comfortable “seamanlike” accommodations for that performance.

I feel secure in my attempt to match real requirements with real boats because I am one of few designers who has subjected himself to his own treatment. I have built from my own plans and cruised extensively in my own boat. Together with my wife and sons—four of us in a thirty-one foot windship—have traveled for several years [in a Searunner 31], on two oceans, and mostly under sail alone—for we have just a 4-hp outboard auxiliary.

Of this experience we can say for sure that real full-time family cruising isn’t easy, but it’s good … if you’ve got a good boat. Whatever kind it is, it had better be capable of making progress to windward under strong trade-wind conditions, be easy to reef and steer in a blow, be a good ghoster in the calms, be maneuverable in a crowded harbor—all of this with a reasonable payload and without dependence on an engine. In her cabins, she needs to be commodious and functional, especially while under way, without reliance on a bunch of sophisticated gadgetry. Those are the real requirements.

In our cruising we have never come across another boat that was used for this purpose and that could out-sail our SCRIMSHAW, and that had such livable accommodations in the same length [of just 31’], and that I could have built myself for anything like the same price. That is where Searunners fit in, right in the convergence of those diverse requirements. If those are your requirements then it is my firmly held opinion that a Searunner design will meet your needs.

Surely the boats themselves are not altogether responsible. Searunner sailors have earned this remarkable record by careful building and good seamanship. Nonetheless, when compared with any other sailors, in any other boats, for any other fifteen-year period, and any other several hundred thousand sea miles, I think we can conclude that Searunners are safe boats. A certain factor for luck must be considered, but no amount of controversy can distort long-term results in the full-size test tank!  Are there any other boats of any type with such a safety record?

Regardless of your eventual choice of a design I wish you good luck in your search, and good cruising in your boat. Thank you for considering a Searunner. 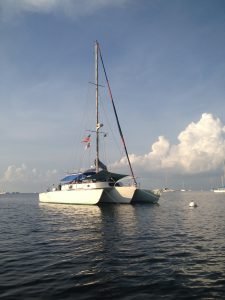 Jade sits on a mooring in Key West after a 7 month adventure in the Caribbean. 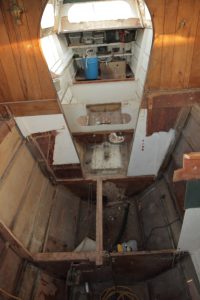 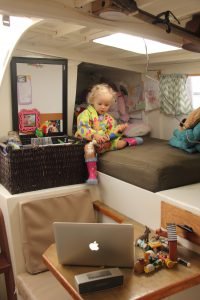 Ani chatting with the grandparents via Facetime in Jade’s stern castle. 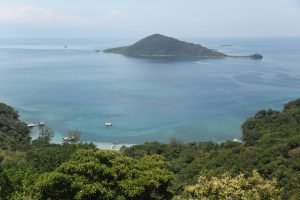 Jade sits patiently for her crew to return on the West side of Cayos Grande, Cayos Concinas, Honduras

You can do so by becoming a Patron. We offer a variety of rewards for becoming a patron and you will be supporting the education and growth of a family dedicated to giving it all to the exploration of life.