“But what shall I do with my furniture?”  My gay butterfly is tangled in a spider’s web then.  Even those who seem for a long while not to have any, if you inquire more narrowly you will find have some stored in somebody’s barn.”

We cast off the dock around 11:00pm on Wednesday, November 23.  Already exhausted from three days of all work, no sleep (it’s more work than you may think to get your affairs in order, get a boat in order, and provision a boat for a seven month tour!) we had to take advantage of the weather window.  Down the dark northeast Cape Fear we went, on our way to downtown Wilmington.  It was cold as ice and a bit windy, what can you do?  We put on more clothes and tried to get excited about our adventure.  The moment I was hoping for, the elation after leaving the dock, was pretty understated.  It turns out I wouldn’t feel that ‘moment’ for another three days. 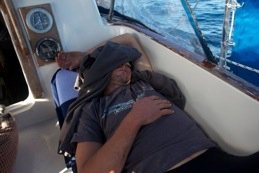 Ren taking the opportunity for a little nap.

I tried not to let doubt creep in as I patiently waited for something to happen.  Anything really.  Anything sign to justify our decision to quit our jobs, sell our stuff (all of our stuff), move on a boat, and leave our families behind.  I waited, not so patiently, for a white dove to land on our bimini top, a shooting star to spell out my name in the sky, Oreo to get up and start dancing a jig, or even Ren to just tell me everything is going to be alright.  In his exhausted state, he was not in a position to offer support to a needy wife.  I shouldn’t have been in the position to feel so needy.  I mean come on, how many people take a chance like we were taking?  How lucky are we to not be paralyzed by fear.  Fear stopping us from our dreams!  But I was paralyzed, not literally of course, but with fear.  That too would pass, but it is still taking time. 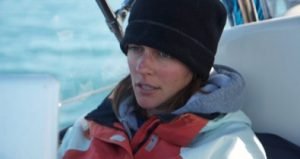 As we approached downtown Wilmington I called my brother, at 3;00am, half hoping he would still be out and about ready to meet us for a beer.  I knew that even if he answered we wouldn’t be stopping for that beer.  It’s kind of like taking off a band-aid.  You gotta rip it off, you can’t slowly pull, one arm hair at a time, until the thing  is off.  We had to keep on going.  We had already said our goodbyes.

We left the Cape Fear river behind us around 7:00 am on Thanksgiving Day.  Our first ocean passage was narrowing in on us.  Once you leap from the precipice, there is no turning back.  The leap off our edge was painless, we landed in water.  The sailing on the first day was good.  The wind was up, and we were able to sail at a nice beam reach.

Let me digress.  Ren has worked extremely hard to learn all systems on the boat.  Since we do not have the option of throwing and endless supply of money every one of Nila Girl’s whims one of us had to learn to be resourceful so that most every repair could be made by us.  Two words, “Not it!”.  Because of Ren’s capabilities as primary captain, engineer, mechanic, husband, etc. he decided to engineer a wheel adapter for our self steering wind vane.  A manufactured wheel adapter, $500.00.  Ren’s wheel adapter, $50.00.  Knowing ahead of time when to buy the real thing, Priceless.  As we were getting ready to settle in, on the same side of the cockpit of course, and let our trusty Windpilot take over for us for a while, we learned that the wheel adapter Ren created just wouldn’t work quite right.  Damn!  I guess that’s what you get when you are rushing the boat for a weather window, not to mention, you quit your job and have to dodge town ASAP in order to stop spending money out of your newly fixed income. 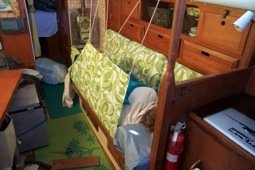 The lee cloth keeping Ren snuggled up on the starboard side of Nila Girl.

Back to sailing down a nice beam reach.  So we were steering down a nice beam reach and decided that hand steering all night just wouldn’t do.  Ren taught me something valuable at that moment.  Something to store in the vault of Sailing Information in my brain.  Not to be   immediately discarded with other sailing lectures from him such as, “trim this sail like this blah, blah blah”, “…then release the switch, then push this button here, blah, blah, blah”, or “winch this here and tie the so and so knot to cinch blah, blah blah”.  No, this advice was something I could immediately start practicing.  You can actually let the boat sail itself, if you’re not downwind, and you set the sails perfect and lock the wheel in place.  Holy crap!  You would’ve thought I won the lottery.  I was going to be able to read, in 15 minute intervals, while on watch.  This was going to be A-Ok.

The wind blew all day and into the night.  We kept watch in 3 hour intervals, which worked great.  Ren sewed us a couple of lee cloths (I told you he was sickeningly resourceful…lucky me!) which I couldn’t imagine spending a night in the ocean without.  They turned our downtime between watches from fitfully tossing around on a settee cushion that’s already a bit too small into a decent little nap.  I actually became so fond of the lee cloths that when we later anchored in the ICWW I preferred to sleep on the settee cushion that still had the lee cloth up.  Sleeping next to one is like being cradled in your mother’s arms.  I may have just been homesick.

We survived our first day and night at sea.  We didn’t kill ourselves or each other.  Oreo faired well too.  At first, all three of us felt a bout of sea sickness.  No chunks, just nausea.  Ren and I ate Gin Gins, in part because they are supposed to ease the nausea of motion sickness, in part because they are freaking delicious.  Oreo tried one but didn’t like it so he fought the sickness by panting a lot.