“…You were only waiting for this moment to be free”

6 days now in the “Real Bahamas”.  No casinos in Nassau, no cattle boats, just locals.  Let me tell you the first thing you will notice about the island nation.  The water is always four shades of blue.  When the ocean floor is sandy the water is a brilliant Carolina blue.  If you aren’t familiar with Carolina blue, think Tarheels.  If you can’t think Tarheels, you have other issues.  When the floor is grassy the water turns into a darker royal blue color.  Think, Blue Devils…or if you prefer, as I do, don’t think about them.  When the floor is rocky with coral reef, the blue is more turquoise.  A nice transition between the sand and grass.  And when the water gets deep, the blue is a dark, tempting, navy color.  My only wish is that I could swim through each stratification of color and bottle the different blues.  I’m sure with a little food coloring you could sell the bottled blues to the tourists.

Oreo boy sporting the lobster scarf his Grammy made him.

We are now in Green Turtle Cay, on the Atlantic side of the Abacos, where we have run into luck.  A friend of ours, John Shedd, happens to own a house here.  He has insisted that we take advantage of some solid ground, a bed that doesn’t move and a….SHOWER!  Of course, with some reluctance, we took him up on his offer.  John, we will never be able to pay back your generosity.  So yes, your protagonists have found themselves in another fortuitous situation with access to a house.  Living next to us is the caretaker of the property, Ms. Julie, her husband, and their son David, who happens to be an excellent freediver.  In fact, we managed to talk David into taking us out for a dive, which didn’t take much effort.  The guy has lived on an island his whole life.  His blood needs the water in a different way than the rest of us water mammals.  The island people feel closer and live closer to the water.  If only they could breath it.

We have met a friend here on the island, Nina.  She is traveling alone from New York City, where the water is not blue, and the saltwater content in her blood is just a relic of our evolutionary process.  She is a teacher and a writer who we invited to come stay at the house with us.  She spent the first part of her vacation on Treasure Cay only to find herself on Green Turtle Cay where the non-authenticity of Treasure Cay became immediately apparent.  Treasure Cay is resort Cay.  There are shops surrounding the resort and this co-dependent nature of resort and surrounding shops masquerades itself as a community.  Much like a series of American suburbs whose center is comprised of no less than one Target, a Wal-Mart, Lowe’s Foods, Great Clips, Walgreens, China One Take-Out, Tony’s Pizza, Barnes and Noble, and Old Navy.  A strip mall or two next to a housing development is not a community.  These development situations lead to depression because they lack something.  There is a key ingredient that everyone knows is missing but the ingredient is hard to identify.  The unknown variable is soul.  There is no soul.  There is no artist, musician, assemblage of free thinkers, the heartbeat of a community.  The elements that make up a “downtown”.  Unlike Treasure Cay, Green Turtle has soul.  Green Turtle operates as it’s own collective even when there are no white people around to buy up all the postcards.  The people are beautiful and patronize each other.  They go to church on Sunday, they fish and lobster, they bake bread, they rent houses, they have parties where the whole island shows up (which we were privy to attending).  For this reason, Nina could not return to Treasure Cay, so we invited her to stay on with us in Green Turtle.  I knew she was friend and travel companion material after we both agreed that a perfect breakfast, such as french toast, is ruined when the chef does not use enough egg wash per piece of bread.  A friendship was forged over a detestation of dry french toast.

As I mentioned, David agreed to take the four of us diving.  After the french toast discussion, it was decided that we would eat a nice french toast breakfast on the boat (that I would cook to ensure proper egg wash to bread ratio) then have David pick us up at Nila Girl on his boat for the dive.  I should mention that Ren and I have cultivated a natural circadian rhythm for island time, which we are predisposed to anyway.  For example, this is how the dive morning went:

“Yes David, we will meet you at Nila Girl at 10:00 sharp where you can pick us up in your boat and take us for a little dive.” 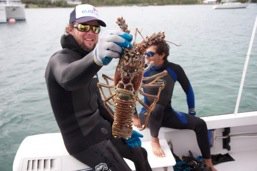 Ren and David with their bounty.

“Oh hey David.  We have just managed to put the french toast in the pan.  Breakfast will take at least 15 more minutes to prepare, 20 to consume, then we have to suit up.  That’s Ok though right?  Does not your life revolve around us?”

“Oh sure guys, that’s fine.  It’s Sunday and all I want to do is wait on your American asses and then show you all my special diving spots even though the weather is not favorable.  You know us Bahamians, too nice to say no to you demanding devils.” 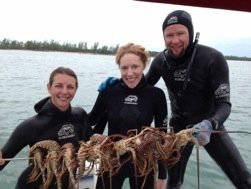 There’s nothing attractive about pics of dead fish, however, lobster are absolutely delicious!

That’s exactly how it went before we managed to make our way onto David’s boat for the dive.  He first took us to a spot for lobster…which proved to be fruitful.  The spot was not an extraordinary dive as it was pretty shallow with sporadic coral life.  We managed to scrape supper together in about an hour in the form of 11 lobsters, one NC sized.  I’m not bragging, I’m just recounting the facts.  This may sound like an absurd number of lobsters but rest assured, the meat is already consumed.  The second dive spot was special.  It was the kind of dive people pay big bucks to go on.  An underwater playground of fish, sharks, and four humans.  We pulled up to the spot and left all fishing gear in the boat.  It’s not the kind of place you take from.  Leave only fin splashes, take only pictures kind of place.  We anchor in about 20 feet in sand and swim over to the reef.  At this point we are offshore and are in an area just inshore of the reef where we are completely protected.  The depth at the reef was about 30 feet.  The four of us cruise along, checking out the fish, blah, blah, blah.  The spot was good and the reef came all the way to the surface of the water, creating almost surf-able waves.  However, I was hoping for a little more.  I was hoping that we would go somewhere where I could fly.  That’s when I saw David and Ren swimming through a break in the reef.  I finned over to the break that reminded me of the Oracles from The Never Ending Story.  Each side of the reef wall towered above me.  You enter the “other side” through a huge crevice in the towering reef.  As I swam through the crevice, I looked down to see the bottom drop out from under me.  The 30 foot bottom gave way to 80 feet just on the other side of the Oracle.  This is 80 feet, Bahama style.  Meaning, you could see blades of grass and grains of sand on the bottom.  Looking down the 80 foot drop, a Bahamian reef shark swam by, followed by a school of Bermuda chub.

Damn it!  There is no way, other than through video (come ON Ren!) to convey the feeling of being suspended over deep water able to see the bottom below.  It would be like jumping off an 80 foot building but not falling, just riding the wind, floating like a bird.  My first instinct was to fly.  This is how I do  it:

I nestle myself back over the reef which is protruding through the surface of the water in some spots.  So I’m suspended in one or two feet of water.  I tuck back in the reef so I cannot see over the edge.  Then, in a sudden burst of energy, I pull myself past the wall of the reef as fast as I can, hold my breath, and soar over the edge of the reef into 80 feet of nothing.  I “jump” off the edge of the building and free fall down to the sandy bottom.  This is the only way I have learned to fly without growing wings, which i have been trying to do for some time now. 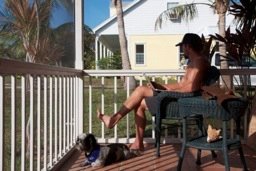 On Doc Shedd’s porch, chilling and grateful for his generosity.

After my flight I look up at Nina and she says something striking.  She says, “This is so beautiful  I don’t even know what to do!”.  I almost cry when she says this because I know exactly what she means.  When your heart fills up completely full and there’s not room for anything else without it overflowing.  It fills with gratitude.  To whom?  Who knows.  For what, everything I just described to you.

Needless to say, we finished the night off with a few Budweisers, some lobster rolls with Thai sauce, lobster tails with red curry sauce and vegetable brown rice.  And yes, Oreo ate lobster too.  In fact, he has a special bandana made by his Grammy Nancy that he wore just for the occasion (see picture).

To learn to fly, contact us at [email protected]  🙂