Making The Decision-By Ren And Ash

“Do not worry if you have built your castles in the air.  They are where they should be.  Now put the foundations under them.”

We can’t thank Eric enough for all of the help he gave us getting things moving.

For two weeks after the first inspection of Nila Girl we combed the web for information on buying a sailboat.  What should we look for?  We asked questions and asked more questions.  We spoke with everyone that we knew that either owned a sailboat or had previously owned a sailboat.  And then we had to find the money to buy the thing.  Big problem!  We thought of everything.  We had a good idea the banks wouldn’t loan us any money and we were right, so we had to get creative.  We had a yard sale and sold my 1982 Toyota pickup, which I didn’t drive anymore.  I sold my half restored 1964 Simmon’s Sea Skiff, a really neat wooden fishing boat built by a Southeastern North Carolinian and craftsman.  I had a little money in the bank to make up the difference.

After negotiating for several weeks with the broker, I drove back down to Merritt Island, FL in November of 2010 and took ownership of a 1968 Pearson 35.  Polonez was now registered in Ashley’s name and from day one the work began for me.  When we purchased her, the engine was not running.  It worked out that the day after I got to Florida our friend Eric.

An extremely talented diesel mechanic, was headed to the Keys to visit his parents and stopped in to lend a hand.  Within an hour we had the engine running and I was one happy camper!  I stayed on the boat another night and left Her in Merritt Island with the intentions of returning with Ash the following weekend to bring her the first leg of the journey back to North Carolina. 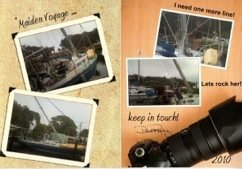 A sweet little card from our first sailing buddies.

Merrit Island is about an eight hour drive from Wilmington so our goal was to finish the delivery in a few weeks doing 200 mile legs each visit south, shortening our road trips by at least 3 hours each time.  We left the weekend before Thanksgiving for our first leg.  The plan was to leave our car in Merritt Island, make it up to Jacksonville, FL with the boat and then rent a car in order to drive south and retrieve our car.  Sounds logical enough!  So after several days of prepping the boat for departure, which included the laying back of the mast, we left Merritt Island.  Why would we lay the mast back you ask?  Well, the only way out of the Banana River was either under a 35 foot bridge or a 42 foot bridge.  The problem with this is our mast is 44 feet from the waterline.  So we spent a day deriving the plan and it all worked out.

I will interject here!  It wasn’t until we actually showed up at the dock that we realized we were “trapped” in the Banana River by a bridge that happened to be shorter than our mast.  We had two things going for us upon assessing our condition;

1. Ms. Maria had successfully sailed Polonez over the course of 15 years, and we knew she went further than the Banana River.

2. Ren happens to be one of the most resourceful people on the planet.  Nicknamed, MacGyver in high school, the man can build a 747 out of tin foil and rubber bands (not really just tin foil and rubber bands, he would require a paper clip too).  So, armed with this information we did what any anxious new boat owning couple would do…we scampered back to Ms. Maria and asked for advice. 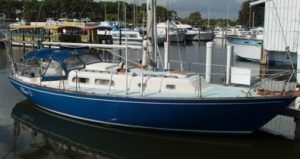 We spent several hours catching up with the Ciechanskis.  They told us stories, offered us some Polish cookies and went to explaining how we would accomplish getting Polonez through the bridge.  As Mr. Alexander drew diagrams for Ren, explaining the feat all the while in broken English, Mrs. Maria also explained, at the same time as Mr. Alexander, over his shoulder, in better English.  Confusing…yes.  It became obvious that we would need to lean the mast back as opposed to de-masting the boat.  The Chiechanskis, innovative immigrants as they are, constructed a special tool to aid in the process.  The tool is made of two 2x2x12 pieces of pine formed like a “V” with a metal plate at either end of the “V”.  The metal plates connected to either site of the boat at the chainplates.  The main sheet and vang is connected to the bottom of the forestay and the top of the “V” of the tool, to the bottom of the main sheet.  Using the main sheet, we slowly laid back the mast and forestay.

As Ren and our temporary neighbors, Mike and Dana (we talk more about them in a minute), worked on the project, my job was to document the process through pictures and film.  The laying back of the mast was a success!

Oh, before I forget, we met some really terrific people at the Banana River Marina.  Dana and Ricky and Mike.  They were big help to us with preparing the boat and just filling us with the confidence to pursue our goals.  Thanks a bunch guys.  And Mike, thank you for the care package!

Again, I feel it is necessary to make proper mention of our new friends.  Dana and Ricky are a couple who have spent most of their married lives together living on the water.  The managed to raise two little girls traveling and sailing all the while.  While they live on a powerboat now, an old Hatteras, they talk of finding a sailboat to take them wherever the winds might blow once again.  One of their daughters actually grew up to live on a boat too with her husband, a few boats down the dock from Dana and Ricky.  During their sailing years they’ve lived all over in the Caribbean including Jamaica.  It was only until their daughters reached their teenage years that they flirted with the idea of moving to land.  They lived this way, topside I mean, for ten years before the ocean called them back home.

While preparing our boat for travel, Ren and I frequently became agitated with each other.  As  we are usually team mates, partners, contemporaries in every aspect of our relationship I soon was faced with the realization that Nila Girl needed Ren MUCH more than she needed me.  My feelings of uselessness were frustrating and causing me to lash out at Ren, who took no issue shouting orders at me.  He thinks, I need a screwdriver.   I’m curled up in the engine room like a pretzel right now and Ashley is just sitting there.  I’ll ask her for a screwdriver.  He says, “Ash, get me a screwdriver!”  I think, I’m right in the middle of something right now.  Get your own screwdriver.  I don’t want to negotiate the companionway for the tenth time in the last 5 minutes.  I say, “Ugh, fine!  Here!”  And so it begins….

Ricky provided me with a little woman to woman advise.  “First rate, first mate.”  Meaning, my jobs are just as necessary as his jobs, even if his jobs determine wether or not we’re leaving the dock.  The work wouldn’t get done if a first rate, first mate wasn’t there to hand over screwdrivers, provide lunch, and steer the boat while the captain is down below, cussing at stuff.  This is how I reassured myself anyway.

Mike was our “next door neighbor” while docked at Banana River.  Mike, a long time surf friend of Dana’s from their formative years, spends his weekends aboard Tater.  Yes, his dinghy’s name is Tater’s Tot!  The three of them just sit back on the water, playing some guitar, drinking some beers and talk.  The good life!  Mike was nice enough to leave Ren and I a little care package on our “doorstep” while we were out provisioning for the upcoming haul.  Who knew velcro sticky pads could be so useful!  We now have them everywhere.

back to the story later….

The Beginning- By Ren

Five years ago Ashley and I pulled out a dry erase board that had been behind a door in my office and decided that we would start writing on it.  Both of my parents preached about setting goals and I recall my father always having these inspirational posters around the house.  One in particular that I remember had a picture of a freshly released arrow flying towards a bullseye.  The poster read “If you aim at nothing, you will hit it”.  So it was time for Ashley and I to take aim.  We listed several goals, I don’t recall them all but one I do remember was the acquisition of at least a 32 foot sailboat.

I had always browsed around but never really felt it was time to pounce until the recent recession.  Why not spend a few grand during a recession?  Probably not a great financial decision but I was still looking none the less.  Each night I would scan various websites in search of a deal.  Maybe someone’s lost dream or maybe a boat that had already fulfilled someone’s dream and it was ready to take on ours.  Sites like Sailboat Listings, craigslist, Ebay, Boat Trader and every other site I could find.  Most used boat sale sites have detailed search criteria so I narrowed my criteria down by price and size of boat.  Anything less then $10,000 and anything between 30 and 40 feet.  After many nights of searching She finally appeared.  Yachtworld.com had pointed us to her.

It all seemed to be coming together.  She was in Merritt Island, Florida, a thin sliver of land running parallel to Coco Beach between the Indian and Banana Rivers.  Fortunately it worked out that 3 weeks after finding her we were headed down to south Florida to work a freediving course.  We made time to cruise by the Space Coast to do the first site inspection.  After finding that Her broker was in Jamaica for a week we decided to check Her out without his assistance.  We checked all the usuals.  Is the deck solid?  Is the bilge clean?  Does the electrical equipment operate?  Check, check and check.  The boat was loaded down with equipment for doing what Ashley and I wanted and everything on it worked.   We wanted to know more.   What is the story of this boat?  We began looking through paper work and found a phone number for the owner.  Hmmm, the broker is going to be pissed if we call the owner, but then again, if we are going to buy the boat we are going to have know more about it.  We decided the broker would only be able to tell us a fraction of what the owner who sailed her could.

So we called Maria Ciechanski.  Actually we went over to her house where we spent about an hour and a half talking about sailing and the boat.  Maria Chiechanski is a Polish immigrant and former orchestra conductor in her late sixties.  She conducted under her maiden name of Maria Tunicka.  Her and her husband Alexander, a former cellist for the St Louis symphony, had owned Polonez since 1995 and had to part with her due to Alexander’s deteriorating health.  According to Maria if it wasn’t for taking care of him, she “would be out cruising now”.  Maria was the captain of Polonez and would single hand her over to the Bahamas, a 70 mile ocean passage.  Alexander would fly over and meet her after his performances.  Maria is a kind lady and it made us that much more comfortable with the prospect of possibly taking over ownership.  We left Merritt Island for South Florida excited about what we had seen.