Nina stayed at the house with us for three days.  As Nila Girl’s leave date approached we were not eager to leave our new friend behind quite yet.  We were sharing experiences; she introduced us to the movie, Taxi Driver…which disturbed our sleep, we showed her the value of a home cooked lobster supper.  She engaged me in really fulfilling breakfast conversation, we took her diving.  It was a symbiotic relationship that needed more time to develop.  Against our initial gut-reaction, which was to haul away and leave a trail of tears behind us, we invited Nina to crew along from Green Turtle Cay, Abacos to Harbour Island, Eleuthera.  It would be two full days of sailing.  We warned her that she may get sick, the weather could get rough, we didn’t have facilities to urinate in, etc.  Without batting an eye, I told you she has a pure sense of adventure, she agreed not to complain about the aforementioned shortcomings and spent the rest of the day canceling and re-booking flights, and I mean the entire day.

A hint of apprehension came while Ren and I were loading Nila Girl up with the personal effects we had brought to Doc’s house.  Laundry, food items, toiletries, etc. filled the bottom of our dinghy.  After we offloaded our belongings we started carting Nina’s stuff over, and kept carting, and kept carting.  With the hard bottomed rolling duffle she had it was apparent that when she booked her vacation she was not anticipating a stay on a sailboat.  And if she was, she had no idea how to pack for it.  This, however, was not her fault but I admit, I panicked a little when the walls of our 10’ beam boat began to collapse in around me as more stuff came piling in.  It wasn’t just the sheer volume of extra things we were taking on that caused the trepidation but the idea of letting a near stranger into our intimate little nest.  The boat is small and Ren, Oreo and I are already exposed to too much in our tight little space.  For example, I can smell and hear Ren pooing while I’m cooking breakfast just 10’ away.  When Oreo got sick from eating sand, he barfed up the fish skin he ate just 4’ from our pillows.  We woke, not to the sound of him barfing, but to the smell of rank fish.  A lot of love and trust make living in this constricted space possible.  I was concerned about how well Nina would fit in to this, and not necessarily with her comfort level but with mine.  A strange girl peeing off the side of the boat just seconds from my husband.  Things could get weird pretty quick if the situation wasn’t handled tactfully.  Ren left me alone on Nila Girl to unpack and organize our things and Nina’s many bags.  I sat alone on the settee for a moment as he ran the dinghy back to the dock to retrieve Oreo and our new crew member.  As I sat, I though to myself, “Well hell, there’s no turning back now.  The sooner I get all of this stuff put into a proper place, the sooner I can regain a sense of control,” which, unfortunately, my character needs. 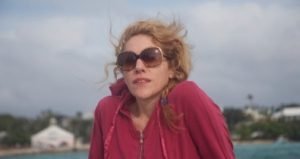 With about two minutes to spare before everyone arrived, I found a place for everything and threatened the rest of the crew when they did arrive that everything should STAY in its place.  After the threat, Nina explained to us that her family was incredibly apprehensive about her decision to board a boat of strangers and set sail.  Turns out we weren’t the only nervous cast of characters in the play.  Over Skype, the captain and I had to reassure, as best as we could, Nina’s Mom and sister that our intentions were not to lure her in to a death trap, knowingly.  We had never murdered anyone on the high seas, yet.  And our pirate lifestyles were limited to Ren’s beard, the pour of rum into our coffee (pirate breakfast), and the occasional pillage.  In turn, our family had to be convinced that Nina wasn’t a “friendship scammer”.  Picking us out of the crowded harbor to gather intel about our boat and relay the valuable information to her counterparts who would ambush us at sea.  If this were true of Nina’s intentions, it would make her both the worst friendship scammer and best actress in history.  The worst scammer because of all the boats in the White Sound anchorage, all but us clearly had enough resources to ensure the most basic comforts while sailing.  Comforts such as a head that you can urinate in, or a shower even.  These comforts must have been lost on Nina because she choose Nila Girl.  A boat where she was required to pee in a bottle (also sharing the apparatus that funnels the pee into the bottle with me) or pee overboard in front of the whole world.  She was required to shower out of a bucket, outside in the cockpit (which she opted to refuse during her time aboard).  She would be the best actress in history because not even Martin Scorsese could script the laundry list of questions and concerns that Nina poured on us.  She responded to our directions and plans with the utmost concern, verging on panic at times.  None of her questions were of the type that would be helpful in conveying usable information to scamming counterparts.  She had no clue about our direction, coordinates, firearm situation, communications, nothing!  These simple facts alone were enough to convince us that she was crew material, not a really bad scammer.  A bed was made for Nina on the starboard side settee, the beautiful, yellow curtain/door for the v-berth was pulled shut (thanks Nannie!) and we closed our eyes, excited about the leisurely sail we had ahead of us the next morning and slightly nervous in anticipation of how our new situation was going to shake down. 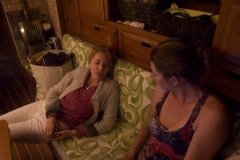 Ashley and Nina bonding in the settee.

We began a nice two day sail over to Harbour Island, Eleuthera at about mid-day the next morning.  We were waiting to depart for high tide so we could traverse a particularly shallow part of the path.  Before our departure we had time to treat ourselves to another breakfast at the Green Turtle Club.  Breakfast is definitely my favorite meal of the day.  It also happens to be the most affordable meal to eat out (win, win, win).  We ate, stowed our gear, pulled the anchor and were off.  The wind was nice, the company was stellar and the sunset later was magic. 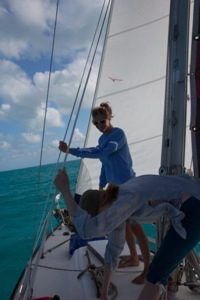 Nothing like a little yoga to keep the muscles loose under sail.

Along the way, Nina and I enjoyed stretching on the bow of Nila Girl while Ren took pictures.  We listened to good music the whole way ending in blue grass, which Nina loves, surprising us since she lives in NYC.  Nina and I practiced our amateur psychology as we discussed our families, work, fears, passions, blah, blah, blah.  I’m sure Ren and Oreo were wondering when the chickens would stop squawking…which would be never….muhahaha.  I took full advantage of having a female companion on board.  You know, another female, who would actually answer your questions in a timely manner after you ask them.  Another female who would patiently listen to your rendition of the night’s dream before sharing hers.  Having Nina on board for conversation was a luxury.  Ren, eager to make Harbour Island, suggested that we sail through the night.  I was not as eager to subject our new crew to that kind of treatment, meaning, an overnight sail.  He shortly rescinded his threat of a night passage when his stomach began to growl and he realized his chances of a descent meal were greatly reduced if we were not at anchor.  Also, the path was a treacherous one at night.  We would be able to navigate more safely during the day, with the sun overhead.  We dropped our hook in  a desolate and protected place called Lynyard Cay. 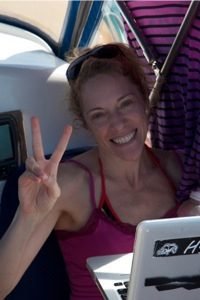 Nina, throwing the peace sign, happy as a lark under sail.

Leaving Lynyard early the next morning, Ren and I let Nina sleep in as we prepped ourselves and Nila Girl for the ocean crossing making Harbour Island would require.  Letting her sleep seemed like the descent thing to do but proved to be a mistake.  Having your breakfast down, things stowed, coffee or tea made and morning constitutional expelled before letting the ocean push you around all day is key to having the most pleasant day of sailing possible, despite the conditions.  It is not prudent to wait for Mother Ocean to kick you in the face before attempting to cook breakfast, and you wouldn’t want to miss breakfast!  Once the motion of the ocean begins, the time spent below deck, in the cabin, must be limited, otherwise you run the risk of being punched in the gut by the nausea of seasickness.  This is precisely the ill fate that awaited our newest crew.  It was our fault for treating her like a passenger, not a crew member, by letting her sleep.  Melville warned against sailing as a passenger as opposed to crew in chapter one of Moby Dick, which I know because Nina read this aloud to us while sailing.

She spent the sick day lying about the cockpit, swallowing bits of vomit just to keep it all down.  Ren assured her that she was earning her sea legs by hanging tough through the sickness.  Landfall at Harbour Island couldn’t have come soon enough for Nina.  When it did, an elated smile washed over our three faces.  We entered the precarious inlet and were rewarded with the flat calm  waters of the harbor.  The shallow harbor floor was littered with huge starfish, nestled in stark white sand.  The captain picked out a quiet spot to anchor Nila Girl where we saw Puff anchored just behind us.  Puff is a mini-pirate ship looking sailboat belonging to our friends Brian and Jeanette Pucella, who are also from NC.  Needless to say we dropped the hook, met up with the sea-weary Brian and high tailed it to land with our libations, avoiding the additional cost of buying drinks at the resort bar where we tied up the dinghies.  We drank and decompressed while Oreo enjoyed peeing on every manicured grain of sand at the resort.  He ran through the neat Zen garden of a beach, peeing and dragging his feet through the little sand rows.  We didn’t even try to stop him.  He deserved the moment.  When we finally limped back to the boat, we made a gorgeous and substantial supper and swallowed the meal and the day down.  All apprehensions relieved through a successful trip, drinks and food.