“As you simplify your life, the laws of the universe will be simpler; solitude will not be solitude, poverty will not be poverty, nor weakness weakness.” 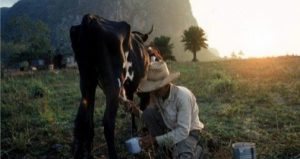 A farmer in the rich Vinales Valley of Cuba. The crew (including Nick) enjoyed traveling the countryside. 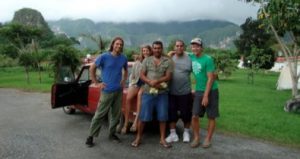 Nick, Ashley, Ren and our two guides behind our trust steed, rojo caballo. The car did not have first gear so we pushed it to get it going through the hills.

I cannot motivate myself to write a play by play of our adventure in Cuba.  I do, however, think about the trip often and of the lasting impressions it has left on me.  The simplicity of the life there was appealing to us, as Americans.  As people who are not forced by our government to work in a cigar factory, drive a car, or own a grocery.  Although the underlying impression was that the people lived frugal lives we never encountered a moment where they seemed oppressed or poor for that matter.  This does not mean they are not oppressed, because they are.  But how can someone be poor if they have a place to live and food to eat.  The Cuban people are not hungry, we cannot always say the same for the people in our Country.  Because they are censored, they do not have access to the latest styles or TV shows, but then again, who needs either of these things anyway.  Distractions.  We occupy our time with meaningless interests just to pass time, or because everyone else is doing it.

Everyone should come to freedom on their own terms, I do believe this.  The Cuban people should find freedom when they are ready.  But, they should also be ready for “freedom”.  They should be ready to vote for Presidential candidate, who will in turn seem ineffective.  They should be ready to have their lives bogged down by a convoluted Democratic process.  They will stand by and watch as “freedom” builds hotels across the green mojotes of Vinales.  “Freedom” will clip their horses and buggies with rearview mirrors as new, improved cars race by.  Be ready Cuba.  This being said, I am writing this at a comfortable kitchen table and will upload to the internet without censorship, hassle or restrictions.  THAT is beautiful!

What else is beautiful?  Toilet seats! 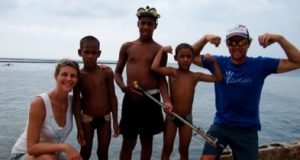 Ashley and Ren with some local spearos.

Later, as I recounted the story of our Cuba adventure over and over I realized that I was glossing over an integral element of the country and it’s people.  When people asked, “Are they really poor there?”  I would answer with a dismissive, “It’s all in the context, “ and launch into a lecture about lifestyles, materialism and the decline of our culture, family orientation and core value system.  I conveniently omitted any mention of the fact that toilet paper is a luxury in Cuba or that there are no toilet seats in most places.  A little piece of porcelain or plastic that is, no doubt, not completely necessary.  When asked about the toilet seat the people would either doge the question or answer with, “No se.”  “You don’t know,” I asked back with confusion.  How could they not know that toilet seats are an assumed luxury in America.  Actually, the toilet seat is never considered a luxury.  It’s a part of the toilet, a part that is always there, faithfully waiting for its next customer.  Furthermore, how can they not know why toilet seats are absent from the servicio scenario?