Two Humans and an Oreo Boy

“A broad margin of leisure is as beautiful in a man’s life as in a book.  Haste makes waste, no less in life than in housekeeping.  Keep the time, observe the hours of the universe, not of the cars.” 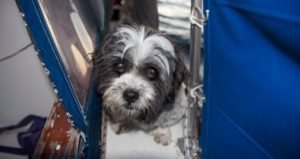 Oreo, so cute and pitiful at the same time.

Now isn’t that the cutest, yet most pitiful, face you’ve ever seen?  Against the wishes and hopes of most of our friends and family, we brought our 15 year old Lhasa-Shit (you figure it out) with us on our adventure, which makes it his adventure too.  Oreo has lived with us for going on seven years now, December makes seven.  There was no way we were leaving him behind.  Oreo cares about only a few things, his people and peeing on everything he smells.  It’s actually pretty impressive.  This animal has an endless supply of urine just for pissing on flower pots, people’s lunch at the beach, his own feet if he isn’t paying attention…EVERYTHING.  I think it has something to do with ‘small dog syndrome’.  He needs his little scent everywhere.  When our veterinarian, Dr. Lackey, asked me if we were taking Oreo on our trip and I affirmed that we were, and she said, “Oh great!” it just confirmed our decision to pack the little guy up, right next to the cans of diced tomatoes and coffee beans. 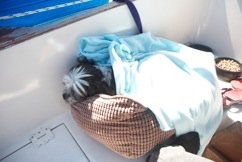 All cuddled up in his doggy bed, blankie and all.

We attempted a twenty-four hour offshore trip with Oreo once before.  He made it the entire twenty-four hour period without the slightest little drizzle or doo-doo drop.  Not that we wanted that.  We tried everything to get him to go.  I’m not quite sure how many times I said (in my best babying voice), “Gotta go pee?  Come on boy, pee pee time.”  Needless to say, after the trial run, I was particularly nervous about Oreo contracting a urinary tract infection, trying not to disappoint us by soiling our precious cockpit floor.  We needed something.  We needed some kind of trickery to get the little bugger to go.

We found manufactured pee pads and the like at pet stores but didn’t want anything that was going to turn to waste.  How would we throw pee pads away while living on a boat in the Caribbean?  It didn’t make sense.  What Oreo really needed was some grass.  Naturally we couldn’t cultivate a plot of grass that needed to be maintained.  Not with our schedule.  The next best thing, fake grass, astro turf.  Oreo’s Grammy Nancy was on a mission.  She wanted her grand dog to be as comfortable as possible!  We came home one day to find that she had purchased a bulk sized portion of astro turf from the hardware store.  I cut the turf to fit the back  part of the cockpit and our problem was solved, I hoped. 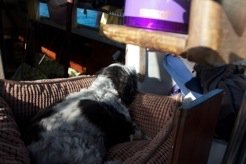 He just chills on board…and holds his urine.

The first urination came after about fifteen hours of travel.  I guess the age onset incontinence worked in our favor, and his.  Oreo was prompted to jump down into the cockpit      floor and make the astro turf his, well, turf.  He liked the feel of the turf against his face and commenced rolling on it.  That was not a good sign.  How were we going to get him to pee on the turf when after he decided to make it his comfort, roll mat?  However, nature called and the call could not be screened.  He cocked his leg and went.  The pee flowed like wine!  Half way through he lost his balance, we were sailing, and quickly recovered by taking a more feminine stance.  All fours did the trick and the tail started to wag. 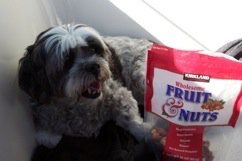 Who doesn’t love fruit and nuts?

Getting him to poo was not quite as easy.  This feat took a good twenty four hours, still not terrible.  To accomplish this, we had to wait until the weather was calm and put him out on the gunnel.  He walked out to the bow, spun around several times (looking for the perfect spit of paint on which to soil) and committed.  This was the first and last poo, to date, I ever saw Oreo take on the Nila Girl.  Maybe he hasn’t had to go as bad as that first time, maybe we let him off the boat often enough now, or maybe he felt a little guilty about it.  Don’t know, but problem solved.  The poo seal has been broken and he now knows he can do it on the boat if he has to. 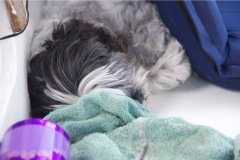 Such a sleepy little animal.

Oreo spends most of his sweet time lying around.  There are a series of pictures on the left documenting his favorite boat past time.  He also eats exceptionally well on the boat.  Sometimes he get just dry food but more often his dry food contains a bit of raw fish, juice from our supper the previous night, pb&j, whatever.  He has eaten a more varied diet in the past couple of weeks than he has in the entirety of his previous 15 years combined.  For instance, this morning he has dry food with the bloodline of a wahoo and pb&j.  For supper tonight he had leftover wahoo in a stew of diced tomatoes.  He has the life.  We also learned that he likes to snack on Kirkland brand Fruit and Nut mix, available at Costco.  He does not like almonds (maybe the consistency) but really enjoys walnuts and dried cherries.  Please email ashley@evolvefreediving.com if you have any information regarding the negative effects of Fruit and Nut mix on dogs.  I’m not aware of any at this point.

We’ll keep you posted on arguably the most interesting part of our adventure, Oreo on board!