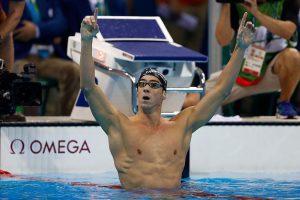 Bet you didn’t miss this action!

Sometimes the gift of going without leaves you feeling…well…without.  Take the Olympics for instance.  You know, the international athletic games that are still on-going.  You can catch any facet of the Games if you just know which network to tune in to.  And all of the major networks are featuring the Games.  You may actually be watching competitive speed walking right now.  But guess who isn’t?

Jade does not feature a television set.  And while we often use the omission of a boob tube as a source of pride (sad, I know) we also miss out!  We sorely missed Michael Phelps, the US beach volleyball team, and gymnastics (which I’ve been told over and over, yaddah, yaddah that it was a performance of historical proportions).  We missed everything except a couple of random track and field events caught at the parents’ house.  As far as Rio 2016 is concerned the gift of going without left us feeling without.

Ren had had enough and knew he could engineer himself out of the “without” if he just thought hard enough.  So one sweltery, salty night aboard Jade we were cooling off in the cockpit well past Ani’s bed time.  Just the two of us, Ren and myself, the Renaissance man’s attention was pulled toward the houses lining the banks of the waterway system where Jade had been anchored.  The water was still and the night was pitch black but we were inundated with flashes of bright blue light.  Not stars, not la luna, not aliens…TVs!  Glorious TVs!  Everyone in the surrounding houses were watching TV and guess what they were watching…the Olympics.  Now thankfully most households in the ritzy Wrightsville Beach area do not feature television sets smaller than the “standard” xx inch versions we could clearly see from our perch approximately one hundred meters away.  Thankfully also we had binoculars within reach.  Voyerous, yes but we were in business, happily watching beach volleyball.

The Gift: Bonding with a Friend

Although we were able to be part of the action in Rio that one night I balked at the idea of us living the “gift of going without”.  Why did we have to go without everything?  But God always has a plan bigger than ours.  Trusting him in his plan is not so easy when Katie Ledeky is in the lineup.  Can we just catch some action?  Come on!!  Cursing our insufficiencies I sulked.  A few days later our good friend Don Kimball called me up for a visit and a lunch date.  I obliged (come on, he offered to pay!) and we found ourselves at The Fish House slopping up some grub. We had a view of the water but what’s new.  I live on a boat.  The atmosphere that caught my attention was the six television sets all head high and all within a neck’s turn!  Not only that, each set was featuring a different part of the Olympic games.  A swim coach by trade, Don was happy to talk my ear off about technique, strategy and psychology of the high performance athlete.  A freediver by trade I listened eagerly.  Our opportunity to bond over watching the Olympic games at lunch launched us into hours of conversation.  Some of the best we’ve had in our five years as friends.  That gift was born of the fact that I had gone with out.  Eager to catch up on swimming in Rio Don filled me in and we effortlessly segued into competitive freediving, mutual friends, life goals, bonsai and yes, the dreaded political discussion, which wasn’t so bad! 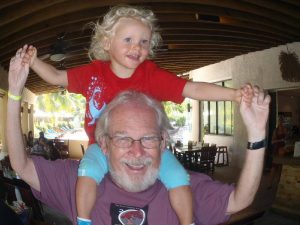 Don helps with Ani when she doesn’t want to get her socks dirty.

Without going without the conversation may have been stale with little new information to impart.  I would have been a lot less interested in being surrounded by televisions at lunch.  But this was not the case.  It was a needed reminder that going without is ALWAYS a gift even if we can’t see the trees through the clouds, at first.